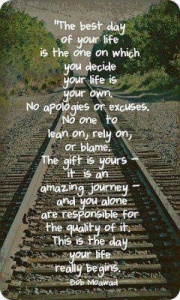 This is the best week of my life because I decided it is my own and I am going to stop at no boundaries to get what I want! It is going to be an amazing journey and I am going take full responsibility for the quality of it each and every day!

This week as I stepped up to the plate and started becoming more aware of what I am eating, feeling, and tracking all sorts of things down to my sleep. At first I thought there is no way I am going to be able to track all the things I want and need to track, but digital technology makes life so much simpler. I can remember the days when I had to write down everything I put into my mouth on a pad of paper, yeah that didn’t last long. Being able to send my tracking to my coach or take a look to see what I ate and why I don’t have any energy. 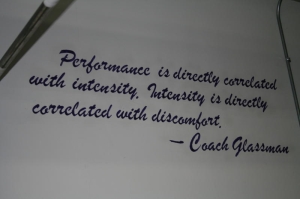 On Friday I had my second private training session with Coach Anthony to end the first week of a long journey. Wow! I know WOD’s can be challenging but he really pushed me to my limits. I was already a hot sweaty mess before I started into the workout. Here is where the tracking and being aware of what I ate or didn’t eat that came into play. I started my workout with a 1K row in which I did in 7 seconds longer than earlier in the week. That day I had a good day of eating and yesterday I had two of those Valencia Refreshers from Starbucks. I had to slow down and take more and I was sucking air. That is what sugar does to your body-sucks the energy right out of you.

The Plan of attack:

I did 12 steps with no angled steps, feel were facing forward and my knees were touching the floor on each lunge, even if it meant that I had to stop for a second to get my balance to go onto the next step. Remembering to push-off from my front foot.

The first set I did with no weights. The second set I used 10# dumbbells in each hand and continued across the box doing 12 steps. Each time I was given a 45 second rest in between sets. The third and fourth sets I used 15#’s in each hand. That was tough, my legs burned like nothing I have ever felt. If it was in a class, I may have not pushed so hard!

Using a neutral position and an angled straight body the goal was to do an AMRAP (-2). Yes, I was curious when I saw that too. So here’s the deal–you go to almost fail, basically two reps to your fail. I’ve gotta get better about writing down, I think I did between 8-10 each set. I had a 90 second rest in between sets. I did 4 sets.

My right shoulder has been bugging me some. I did dislocate it a few times playing college volleyball-but, I am going to try to get to a Crossfitter Chiropractor to see what is going on inside and maybe I just need to get it adjusted more often. In the meantime on a side note I am noticing nice changes in my shoulders. Looking sexy!

I have no core so I know I will be seeing a lot of these over the course of the next weeks and months. Okay, I did each set for max seconds hold. I could only hold between 19 and 22 seconds each time. My goal is to get up to 30 seconds in the next two weeks. I probably shouldn’t say this…but I am kind of surprised I didn’t get plank holds for homework.

Are you tired? Now for some Max Aerobic Power (MAP)! So there are basically four levels of MAP. I started with level one; 30 seconds at 85% and 30 seconds at 50% for 12 minutes, I made it 10 minutes. All of this was done on the rower! It was harder than I thought it was going to be, you really have to pace and control yourself. The goal is to stay within your 85% number and your 50% number, which mine were 120 and 65. I really had to try not to pull to hard to keep the numbers within where they were supposed to be. It came down to being able to pace myself and control my breathing. I can’t imagine doing that for an hour and half like they did at the CrossFit games (2013) this year. My back was sore after 8 minutes. Anthony said my goal is to get up to 30 minutes of MAP 1.

Needless to say, I left it all at the box! I was drained when I left there! Yes, I was in great pain when I left, but guess what–it will probably hurt less next time! I woke up this morning feeling a little sore, but not as bad as I thought I would be. So does that mean I maybe had more in me yesterday and didn’t push as hard as I could or does it mean I’m getting stronger? Thoughts to ponder!

I broke down and decided I would go and buy a foam roller-I found this on Pintrest!

My experience, struggles, strength, a full transparency of me. View more posts

I'd love your feedback! Cancel reply