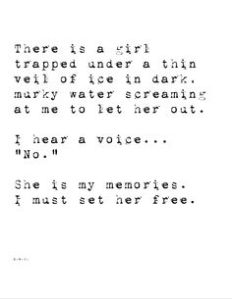 I am not sure how to start this post…it might not make sense to you, but writing for me is a way to release and let memories free.

I am sitting here on my couch still shaking inside from the terror I faced with my neighbors traumatic event. It is every women’s worst fear and for her it happened. While we all deal with this in different ways, the thoughts and emotions brought alive events that have happened in my own life. I am on edge, shaking, and at times I am still sick at my stomach. She was in shock and some ways I was in a little shock too. As I write this I have tears running down my cheeks and can feel my heart racing as I know it will be dark soon. It took me a long time to get over being alone in the dark and now I feel like all those feelings of fear of the dark and being alone coming back. She is much stronger than I am or just deals with her emotions in a different way. While I am thankful I live on the second floor, I still can’t stop thinking what if this strange man comes back tonight and does the same thing to someone else. Does this stranger live in the community around us? Is he someone we know? So many unknown questions still.

Last night I got a knock on my door and it was my neighbor. She was flailing her arm around while blood ran down it, someone broke into my house and attacked me. She came in, collapsed on my floor while I called 911 and tried to get answers from her. She was pale as a ghost, shaking, and in shock. While part of me wanted to freak out and scream and cry I knew I had to be the strong one for her. What seemed like an eternity, was probably only a few minutes there was a loud knock at the door–multiple police men were there to start helping. Then a few minutes later the firemen and emt’s showed up. I had to excuse myself to put on some clothes and to be sick at my stomach. I knew I still had to remain calm and not show any fear for her. But inside I was crying and freaking out.

We live in a nice part of town in a gated community. It isn’t something you would expect here. Why did this happen? It was the early morning hours when we got back to the condo community. The police and detectives stuck around for a little while and just as the sun was starting to come up, that is when I fell asleep for a few hours. I’ve went and got coffee and some breakfast and took some over to my friend/neighbor. We both became more aware that we have to lock our doors and not let our guards down through this unfortunate incident. She has several stitches and has been talking with friends and letting go.

We both have gone through abusive relationships in our past so this was difficult in some capacity for both of us. While she is facing more trauma from the incident for me it brought back the fear of being in her shoes. While the circumstances around my attack were somewhat different the experience is still there. It took me a long time to trust again, to not be fearful, and to learn to let go of the things I can’t change. It took me a long time to realize that it wasn’t my fault I didn’t do anything wrong. Helping is what I do best and I know the best thing I can do is to be there for her.

Writing and talking helps….I’m trying not to put my guard up and revert to some old coping habits. You can bet I’ll be finding out why our so called “security” wasn’t around. I can’t help but think if they were doing their job and monitoring the community that this wouldn’t have happened. I know we can’t turn back the clock and what is done is done. All we can do is learning from it, grow, and heal.

My experience, struggles, strength, a full transparency of me. View more posts

One thought on “Rush of emotions”

I'd love your feedback! Cancel reply